Mycology in the Nobody Zone 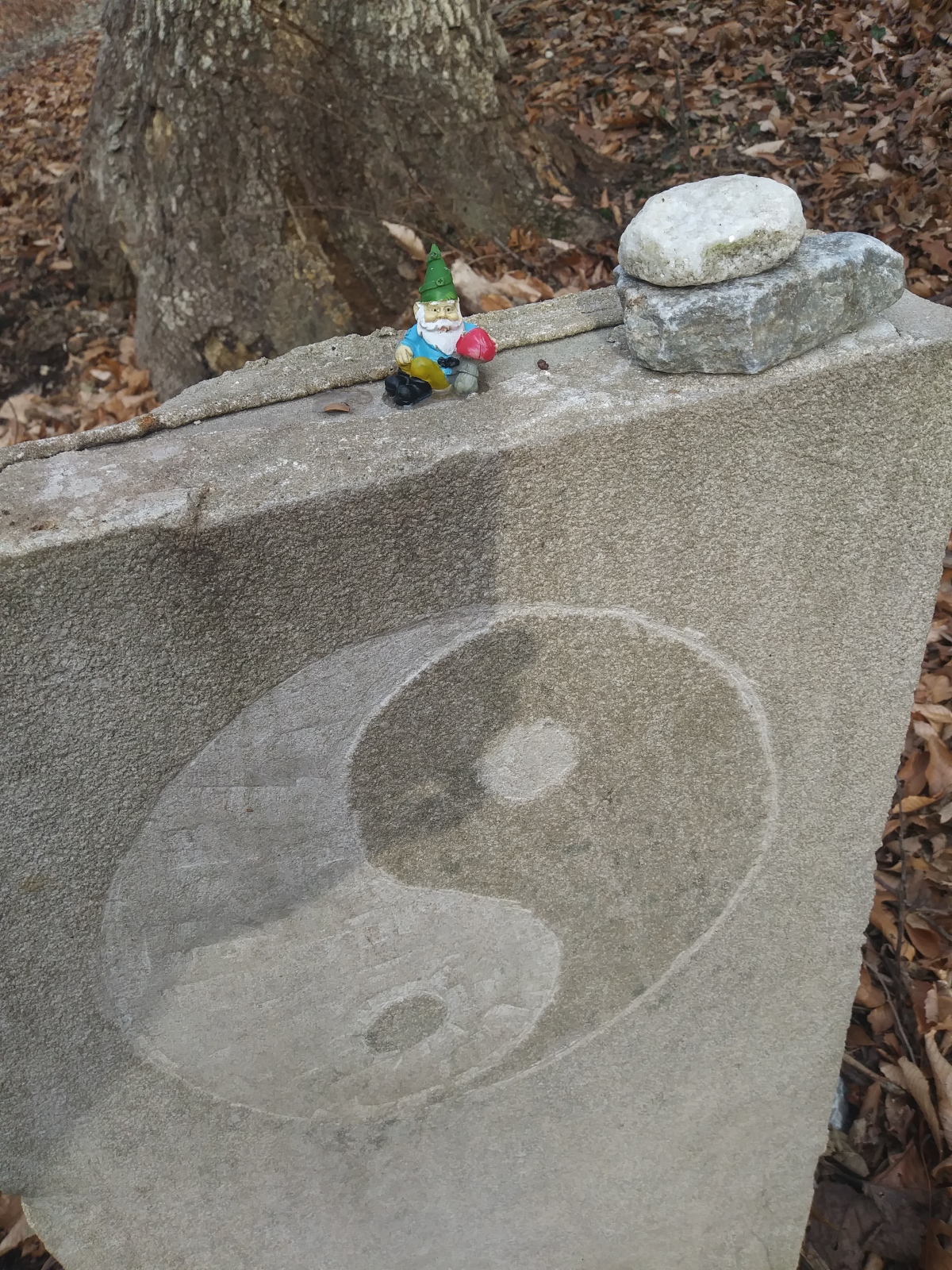 VANISHED HILL PARK—Don’t be fooled by the diminutive nature of the guardian sitting atop this slab of dualist symbolism. Flanked by two stones left as offerings by invisible visitors, this simple Taoist gnome-monk is the ambassador for a magical place of peace and tranquility—a necessary retreat from the surrounding urban chaos. Yet it is a lonely existence for the monk on the monument. No one lingers long at the gateway to paradise. And so as he sits gripping his precious toadstool he pines for companions left behind in what feels like another lifetime. He wonders what adventures he’s missed since setting off on this solo journey of self-reflection so many years ago.

How disappointed he’d be if he saw them now. In the absence of people, the gnome’s former companions have reverted to the old feuds and factions. In the dark portion of the Nobody Zone, the small folk have again begun their “game,” whose rules constantly change, and is therefore not really a game. It’s only a game in the sense that no consequence will ever come of it. But where do the ever-evolving rules come from? They seem to well up, daemonic, from some atavistic source deep in the earth. The small folk are the playthings of the dark. The dark lusts for color, so they have become brazenly colorful.

Now the small folk lie scattered among the crevices and voids of the dark place. An air of nausea and dissipation sets in, but they continue to play, maniacally. The game has grown gravely serious, because in the dark the game is all there is.

But things are no better over in the lighted portion of the Nobody Zone. Here the wooden soldiers have phalanxed themselves like the pipes of an organ. From shortest to tallest and back to shortest again, they are a troop well assembled; every one of them knows his place. But there’s no straying from this configuration. The light has caused a hard, plain clarity; a space devoid of ambiguity and, hence, possibility. So unlike the dark, whose daemon was one of constant changeability, the light produces a daemon of grueling persistence. Fixity.

And this is also atavistic, for in each wooden soldier lives the remnant of a deeply rooted tree. There’s a yearning there, to extend in a single sunward direction. But the soldiers’ mouths have never tasted nut or kernel. They’ve had no opportunity to discover themselves. They will never move or grow another inch, because in the light the existing order is all there is.

It is true that in the light there is order—the order of natural law. Certain lines within that body of law dictate that all life ends, breaks down, and thus—out of death and deterioration—provides sustenance for new life. The wooden soldiers stand unaware of this, though that remnant of tree inside each one still ripples as a ghost of its arboreal ancestor. And so perhaps the taste of an ancient “kernel” does yet linger at the back of their gaping wooden maws. What if this taste were to suddenly sharpen, then to stimulate the hardened phloem buried in those soldiers’ sclerotic limbs and activate that long-suppressed spark of life?

As we now know, the rules to the “game” never shed their dynamic nature. The Nobody Zone is a seemingly random network of interlaced liminal spaces. While we have established there is order (e.g., natural law) in the light, this order does not necessarily extend beyond the reach of that light. And while the contrast of disorder governs the dark areas of the Zone, what of the other fractal spaces in this place? Is there perhaps an overlap of order and disorder to be found in the gloaming?

Awakened from their slumber by such ineffable energies the source of which we are forever wont to question, the soldiers leave their pedestals in unison and march off away from the light toward the edges of their own reality. Traversing a line unnoticed by their forward-staring eyes, they are suddenly assimilated into the crepuscular sector of the Nobody Zone, where the laws of physics kneel to the “laws” of absurdity. A realm where states of matter are fluid and dematerialization is routine—where dark and light mingle their individual aims and objectives into oft-monstrous hybrid purposes. Here, having followed their atavistic instincts, the soldiers have (literally) returned to their roots, though for how long remains uncertain.

Root and rhizome return to spongy, alluvial soils. They interlace and flex, turning up a witch’s roil of growth and decay. The soldiers clack their last salutes as their formation turns to mulch. The small folk scream and are forcefully demarcated. In the crepuscular sector, both and neither a battlefield or playground, the old companions have collapsed into discrete, orderly piles of chaos. The stench is incredible. They lie there, inert, ready to feed whatever opportunistic, detritus-loving species comes next.

Back at the empyrean gateway, the gnome-monk can feel the Taoist symbolism hugging itself more tightly than before. In emulation, he presses his precious toadstool to his belly and decides there’s no reason to be lonely anymore. He is the toadstool and the toadstool is him.

Learn about After People »

We create and disseminate interstitial texts and imagery, both online and in print, for the Anthropocene. View all posts by gpa

This site uses Akismet to reduce spam. Learn how your comment data is processed.

We're a collective that publishes books and collaborative narrative experiments. We are drawn to the liminal, the interstitial, and the hidden in plain sight. Learn more about us.